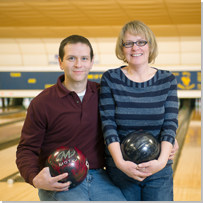 “The difference it made in my life is amazing … I can’t imagine living any other way.”

Gaining a Passion for the Future

In February of 2011, when Roberta (Bobby) Clingan of Ithaca tore the meniscus in her knee while bowling, she had no idea the injury would eventually lead to a new, healthier and happier life for both herself and her husband, Mike.

Bobby, who also took medication for high blood pressure, endured two surgeries to repair the knee. “It was causing me a lot of pain,” she said. “My doctor told me my knee would not get better until I lost weight, but I couldn’t exercise because of the knee pain.”

A bowling buddy who had undergone bariatric surgery suggested Bobby look into the procedure. “In June, I went to an information seminar to learn more and I brought Mike along for support,” she said.

While at the seminar, Mike, who weighed 310 pounds and suffered with severe sleep apnea, realized that he also had a lot to gain if he lost weight. “After listening to others talk about the quality of life they enjoy after their weight loss, I decided I wanted to know more,” he said.

After months of consultations and preparation, Mike underwent Roux-en-y surgery at MidMichigan Medical Center–Gratiot. Bariatric Surgeon Jeffrey Smith, M.D., performed the laparoscopic procedure on December 13, 2011. Bobby had the same procedure, and the same surgeon, a week later, on December 20.

Mike found the surgery easier than he had anticipated. “I expected more pain but it wasn’t bad at all,” he said. “I was in the hospital for three days and was back to work in three weeks. I had no post-op issues at all.”

“Being away from home, and from my own bed, was the worst part for me,” said Bobby. “While I did have some issues, they were not related to the bariatric surgery. After my gall bladder was removed, things were fine.”

Bobby said going through the bariatric experience together was a bonus. “We took care of each other and depended on each other,” she said.

After surgery, Mike and Bobby were on a liquid diet for about a month and then slowly re-introduced solid food.

“It wasn’t hard to change the way we eat because they really did prepare us,” Bobby said. “They give you all the information you need – you just need to follow through.”

“Dr. Smith is very good and very thorough,” Mike said. “He answered every question we had. He and the staff made sure we knew exactly what would happen if we did – and didn’t – eat like we should.”

While some foods and beverages are no longer part of their diet, the couple agree they do not feel at all deprived. “We read food labels now – looking for high protein and low sugar — and we cut our grocery bill in half,” Mike said. “When we go out to eat, we get one meal and split it,” Bobby said.

More than a year after surgery, the two have maintained their healthy weight levels.

Mike lost 130 pounds. “I weigh less now than I did in junior high,” he said. “The only things that fit the same now are my contacts. Even my glasses are too big.”

Bobby, who weighed 263 before her surgery, lost 110 pounds. “I have no problems with my knee now,” she said. “I’m also off my blood pressure medicine. I think if we had not had this surgery, we were headed for diabetes and heart problems.”

The couple believe that bariatric surgery has added years to their lives. Bobby also believes they have boosted their immune systems. “Neither one of us has had a cold or any other illness since the surgery,” she said.

“We are much more active now,” Mike said. “I walk at least three times a week.”

“We also have a 125-pound Labrador who gets walked more often,” Bobby said.

“I feel good about myself and know I am so much healthier,” said Mike, whose sleep apnea is a thing of the past. “Now I can go outside and work for an hour without feeling joint pain or out of breath. I can complete projects without stopping – that’s a nice, healthy feeling.”

“The difference it made in my life is amazing,” Bobby said. “I am much more confident and so much happier. It truly is a life-changing experience. I can’t imagine living any other way.”

Mike said other people can enjoy the success he and Bobby have achieved. “If you set your mind to it, you can do it. It was the best decision I’ve ever made.”

“I’d do it again in a heartbeat,” Bobby added. “It’s the best thing I ever did for myself.”